White House Press Secretary Jen Psaki on Wednesday was asked about the $3.5 million Hunter Biden received from the wife of the former mayor of Moscow.

Psaki brushed off the reporter’s question as if it was total nonsense with no documents to back up the claims.

“I am not familiar with that claim. It does not sound like it is backed up with a lot of evidence,” she said.

How much more evidence does Psaki need?

According to documents the Senate committees obtained from the Treasury Department:

Joe Biden and his corrupt son Hunter still have not been held accountable for their international money laundering scheme.

Psaki treated the reporter as if the Hunter Biden story was just an internet rumor.

Update: Senator Ron Johnson jumped into the fray and responded to Psaki’s absurd claim she was “not familiar” with the senate report:

Trump brought up the $3.5 million payment to Hunter Biden during one of the presidential debates.

Trump continued, “And also, while we’re at it, just out of curiosity, the Mayor of Moscow’s wife gave your son $3.5 million. What did he do to deserve it? What did he do with Burisma?” 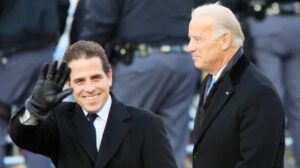